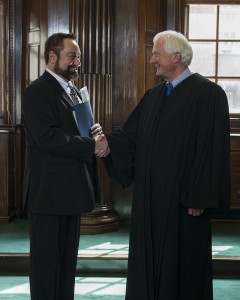 After over 20 years of practicing law in Massachusetts and Florida, Mr. Feeney was recently admitted to the State of Rhode Island Bar on Tuesday, October 7, 2014.  Alan was joined by family and friends to witness this joyous occasion as the Chief Justice of the Rhode Island Supreme Court, Paul A. Suttell swore in Alan.

Alan has over 25 years of legal experience including over 20 years specializing in intellectual property law.  In 1997, he graduated from the University of New Hampshire with a Legal Letters Master of law in Intellectual Property degree (LL.M.).  Alan earned his Juris Doctor degree from the University of Miami School of Law in 1990.  He also holds a Bachelor of Science degree in Chemistry from Boston College.

While working as the Chief U.S. Patent Counsel for a biopharmaceutical company located in Paris, France, Alan developed intellectual property strategies to protect the company’s peptide and protein products and drug development candidates.  He has successfully drafted and defended approximately 100 patents.   Additionally, Alan served as patent counsel for many international joint ventures and partnerships in the European Union, as well as, the United States.